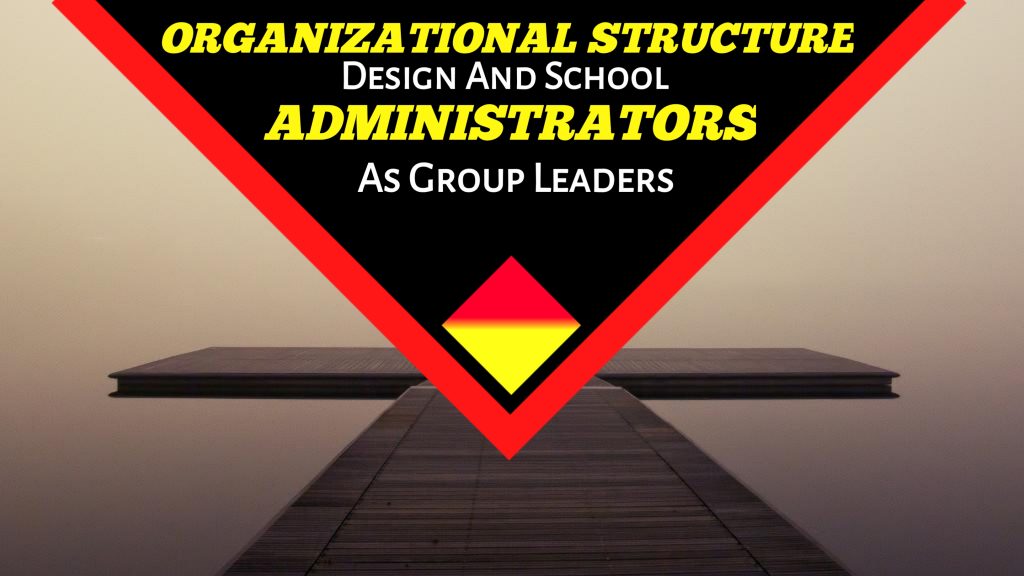 Specialization of job; some organizations are structured for workers to do highly specialized jobs thus in such organizations like the school tend to group jobs according to homogenous or common functions.

Schools as formal organizations have some type of organizational structure that help them implement short and long range plans for the accomplishment of educational objectives. Schools at all levels are organizations that are established with the specific aims of equipping  their clienteles with knowledge, skills and attitudes that will help them live quality lives and also contribute meaningfully to the development of their  immediate and global society.

To achieve the softy goals of education, the school organization must provide a system of selecting its leaders and role to be played by various people occupying various ranks within the organization. In the Nigerian education system for example, the federal ministry of education and is responsible for the formulation and execution of all null national policy matters.

Max weber, the foremost proponent of bureaucracy sees the pure bureaucratic organization as having a set of characteristics that contribute to a hypothetically rational, disciplined, precise stable, reliable and effective organization.

The school as a formal organization exhibits some bureaucratic tendencies. The bureaucratic model adopted to school administration is characterized by some key features of weber ideal bureau cry. Peretomode [1991] identify these characteristics as;

Job design is a managerial duties concerned with determining exactly what must be performed to complete the work of the organization. Job design factors accords to Obi [2003] are aspects of an individual’s job which include;

It should be noted that the information needed for job design is derived from job analysis, job descriptions and job specification.

This is the process of gathering, analyzing and synthesizing information about jobs for the purpose of developing job descriptions and jobs specification. It specifies the task that must be accomplished to complete a job and also determines the skills and knowledge necessary to perform the tasks [Ernest & young 1991].

Presently job analysis applies to all types of jobs including teaching. In school set up; an overview of the school organization and job; provides a working picture of the arrangement of departments and units. Data recollected on the characteristics of the job, the behaviors activities required by the job and the___14 employee skills needed to perform it.

Job description is written summary of job. It gives details of job activities. Equipment required to perform them and the jobs working conditions.

Job specification the other hand, provides a written explanation; skills, knowledge abilities and other characteristics needed to perform a job effectively.

The difference in working conditions, salary scales and allowances paid to academic and nonacademic staff of tertiary institutions is based on the differing job descriptions and specifications.

A group is defined as two or more people who act together to accomplish a goal, it is a small social system consisting of persons who influence and are influenced by others. The members are psychologically aware of each other and see each other as part of the group. The group can shape the individuals beliefs about him or himself and his or her work attitude.

There are two major categories of groups from an organizational perspective.

Group development is the progression from a collection of people literally brought together for a common purpose to a well-functioning whose effectiveness has stood the test of time. The four stage process of group development to include;

Members of a group that has successfully attained a specific goal are encouraged to know that goal attainment would not have been possible without their efforts thus giving them sense of achievement. The need for affiliation is met through the attachment to other people in the group.

Group members in every work group are assigned roles to perform. A role is set of shared expectations regarding a member’s attitude and task behavior within the group. A group at its basic level have two roles. The role of a leader and role of a member. The number of roles will depend on the complexity of task group. The greater the complexity of a group’s task, the more the role to be performed by members.

The use of groups in education administration

The use of the group in facilitating management is more pronounced in higher education colleges and universities than in other levels of education. The committee’ which refers to a group of people officially delegated to perform a specific function has become a veritable instrumenting the hands of higher education administrators. The responsibility for decision making in the university is invented constitutionally on the council, senate, the academic board, the faculty board of the departments and institutes.

The committees in a typical university into 3 major categories. They are;

The reasons for the use of a committee system in higher education to include;

Its major disadvantage however, is that it causes delay which can lead to decisions being outside the stricture thereby cast’ doubts on the value of the committee methods generally.

To ensure the effective utilization of the ability of group members to attain groups objectives thereby contributing to the organizations overall effectiveness, the school administrator should set up mechanisms that will ensure that;

Administration responsibilities of a school administrator

Nature and scope of education administration and management

Educational administration and its principles

NYSC online platform in your pocket