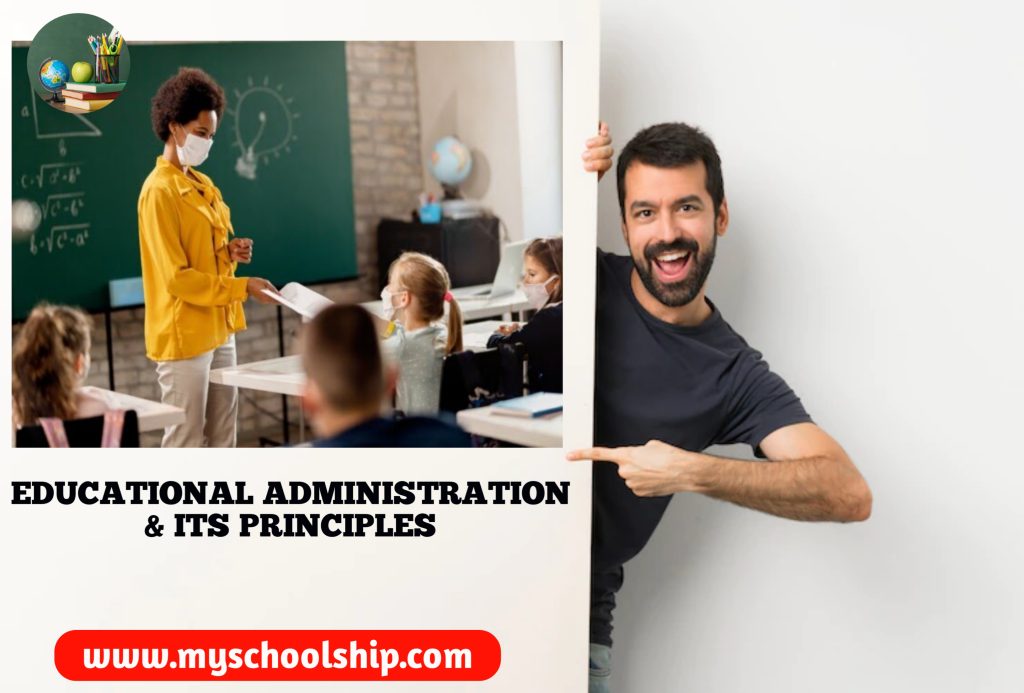 The five major categories of administrative principles according to nwankwo [1982] are;

These principles border on issues affecting the well-being of individuals in an organization and seek to promote their welfare through the elimination of fear, pain, anxiety and suffering [akubue 1991]. the humanitarian principles consist of:

this requires that every democratic order must involve all those to be affected by any decision to be part of the decision making process. such a democratic administration which accords the individuals and groups composing it, the opportunity of participating in policy formulation and implementation is characterized by:

The establishment of standing or adhoc committees to handle some issues in schools and make recommendations to the school head at all levels of education is an example of the application of this principles, Ukeje, okorie and nwagbara [1992] argued that the school must be democratically governed so as to inculcate such virtues in the lives of the students.

They advised school heads applying this principle to always refer any unwholesome decision back to the group who made it for thorough consideration before arriving at a better decision. Rejoinders could also be used for better decision.

It is however important to note that uniform procedures are better than arbitrary discretion,. therefore ” a good and effective administrator is the one who is able ro keep between the rough edge of uniformity and sharp edge of arbitrary discretion. [Ukeje, okorie and Nwagbara 1992:86].

This principle advises administrators to show a good understanding of people as unique individuals that have peculiar needs, interests and backgrounds which may influence their behavior and expectations. this will help to reduce hostility and conflicts drastically in the school environment. this principle according to Ukeje et al [1992] compels the school administrator to maintain accessible but respectful distance from the staff and students.

Principle of equality of opportunity

Security is a universal need of every individual and group. the level of justice and equality of opportunity observed by te super ordinate in any organization is the level of sense of security the subordinates will have. this principle mandates the school administrator to defend and protect the school staff while discharging their duties. they should ne protected from internal and external aggressions.

Prudential principle has been described as the practical application of wisdom, the exercise of caution and the use of force thought or foresight in management of an organization. it implies the ability to plan , regulate and calculate possible causes, effects and results as well as to cover loop holes for fraud, cheating and temptation [Akubue 1991]. this principle consists of other sub principle as follows.

This principle stipulates that lines of authority send responsibility must be clearly defined in order to avoid conflicts of authority and over lapping of jurisdiction. the principle demands that individuals should not take direct order from more than one Pedro. Thus, suggesting that every staff should be made know what he is responsible for and to who to be accountable.

This principle states that all staff members should remain faithful and loyal to the case or mission of the organization. it recognizes the importance of group loyalty and consensus in achieving organizational goals. the administrator is therefore called upon to harness the loyalty of the group, and not frustrate it by his other actions.

The principle of economy states that an investment in every -business requires prudence. prudence according to nwazurike [1997] refers to wisdom in investment actions as well as reasoned or measured risks and cost effectiveness. emphasis in public institutions such as educational institution should focus on maximizing or optimizing service while private businesses Centre on optimizing profit thereby emphasizing cost – benefit analysis.

Awareness of popular standards of achievement

This demands that every administrator should be aware of what the public considers to be standards of behavior efficiency and achievement. it calls for the respect of public opinion as an important factor in determining educational practices. Akubue [1991] warned that the administrator should do this without abdicating his/her responsibility .

A balanced compromise demands that administrators should encourage community participation in matters relating to student services. personnel and financial administration but must not be allowed to br controlled by them.

This stipulates that adequate staff in terms of quality and quality should be employed to perform the organizations task. this called for an efficient personnel functions that will meticulously recruit, select, orientate, develop, appraise and discipline school staff without bias of sort.

This principle demands for checks and balances in all financial administration. it equips the school administrator with the wisdom to know that the needs of the allocation of school funds as way of actualizing teaching and learning which is the primary aim of the school organization. this principle according to Akubue [1991:136] required administrators to

observing due process in financial matters as advocated by this principle will be very helpful in ensuring accountability by the administrator thereby exonerating him or her from malicious accusations. it will also safeguard the public against misuse and embezzlement.

This principle is relevant to every administrator because the society is dynamic thus subject to innovations and changes. school administrators play key role in effecting changes and innovations or retard them. The principle helps them to develop defensive plans for effecting appropriate changes as to meet future challenges.

The principle of change comprises of the following

This demands that the school should change their response to societal changes which may be in form of new ideas, values, innovations etc. It reminds school heads that school policies, rules and regulations should be constantly reviewed in response to the need of the community, staff and student.

Educational institutions should be made progressive, open and dynamic so as to welcome new knowledge, ideas and conditions

This principle according to Uwazrike (1997) seeks to ensure that changes made are not mandatory to all groups whose conditions or situational properties differ. Uniform rules such as wearing of school uniforms rules such as wearing school uniforms in schools should be made flexible – in terms of the material and sewing so as to suit the local conditions and environmental variables.

This principle is supplementary to adoptability in the sense that change must come after careful considerations of the benefit of such change and should be effected gradually.

Ukeje, Okorie and Nwagbara (1992) advised that the process should involve assessing the advantages of the new, checking the by products and the repercussions that may occur before deciding on the change stability demands that the benefits or good aspects of past administrations should be recognized and retained and incorporated in the new administration to ensure continuity of good and effective policies and practices.

bureaucracy as conceptualized by webe- [1947] is supposed to be ideal type which describes relationships and other factors that exist when people work together to achieve common goals. this ideal type of bureaucracy according to grosky and miler [1981:8-10] functions as follows;

The elements of bureaucratic principles include;

Through the principle of bureaucracy has several advantage in ensuring effective administration, it also have certain dysfunctions if applied without sense of prudence by the school administrator.

This principle is made up of three sub-principles namely;

The principle of responsibility;

this stipulates that each staff in every organization should be assigned a responsibility to perform. the assignment of responsibility should be based on qualification and competency to ensure efficiency in staff performance.

The principle of communication

This principle emphasis the need for effective communication in every organization. the school administrator should encourage information flow vertically and horizontally so as to keep the staff and students abreast of events in the institution. The cool head should generate ideas and suggestions from the subordinates by encouraging upward communications this will help him/her maximize the benefits of participatory decision making.

The principle of delegation of authority

This principle demands that organizational task should be assigned to staff members with commensurate authority delegated with the task to enable the staff function effectively. the application of this principle is seen in the education; institutions in the delegation of authority from the school heads to the deans, heads of departments. house masters, form masters, labour masters etc. to carry ou duties of their departments and unity .

The principle of executive leadership

This principle stipulates that the chief executive should provide central coordination of activities since he is seen to be at the nerve center of administration. it implies that how well each executive can fulfill leadership potential is related to personal and situational factors as seen in his dynamic interaction with various groups in that situation [knezevich 1975].

Stogdill [1962] identified some of these personal and situational factors considered necessary for the assessment of one’s leadership behavior.

It is imperative to note that all the principles of administration discussed i this chapter are meant to guide the administrator in every organization to make sound and effective decisions which is the nerve Centre of every of every administration.

Nature and scope of education administration and management

Educational administration and its principles

Administration responsibilities of a school administrator